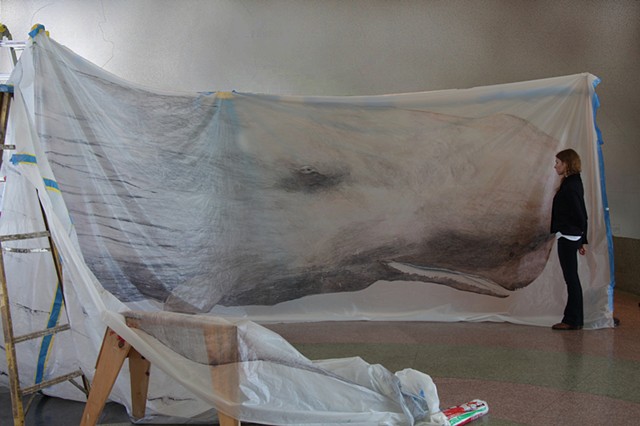 How to Buy Train Oil:
< previous next >

-1849“The Nantucket whaleship Aurora sets sail for San Francisco. By December it will be abandoned in the harbor when the crew heads inland looking for gold.” How to Buy Train Oil Life size drawing of the Image of a Sperm whale on Plastic construction sheeting.

This work is a meditation on the ongoing exploitation of resources. On how the end product of this exploitation is often smaller and less impressive than the original. It was inspired by artifacts in the other side of the room: the haul of a ship used for Sperm whaling and abandoned by it’s crew— who turned to gold mining in the California Hills, and an adjacent display of scrimshaw that includes Sperm whale teeth. The work was also inspired by the Artists’ bicoastal history: growing up in New England whaling towns — and moving in her lifetime across a continent following a legacy of westward exploitation.

Train Oil, the popular term for whale oil in its time, was often used for commercial grade soap and low-grade lamp lighting. It was the cheep abundant fuel of its day. Ironically it was the fossil fuel industry that would make whale oil fairly obsolete. — And yet it was also industrial scale commercial whaling operations, fueled by fossil fuels, which spelled the near extinction for the animals until legislation was put in place in 1986.

The use of plastic in this work draws a connection between the whale oil industry and fossil fuels, which is, of course, the oil that we use today for making cheep disposable products. We may one day see this exploitation of land and rock for this cheep oil as equally absurd as we now look at the hunting of these iconic animals for cat food. The choice of construction materials additionally references the recent and ongoing restoration of the Maritime Museum, as well as the Artists own personal relationship to ongoing construction in the Bay Area as it undergoes a boom period.

The time the artist spent hand drawing this work was a personal meditation on a quote she encountered as a child, “we never did find a better lubricant than train oil…”

Sperm Whale oil (spermaceti— which was also colloquially referred to as train oil) is a waxier oil, found in the animals head cavity and different from other whale oil, it was often used in the combustible engine— and has never been replicated. Alas, “we never did find a better lubricant than train oil…”