Works > Drawings to be recycled where facilities exist 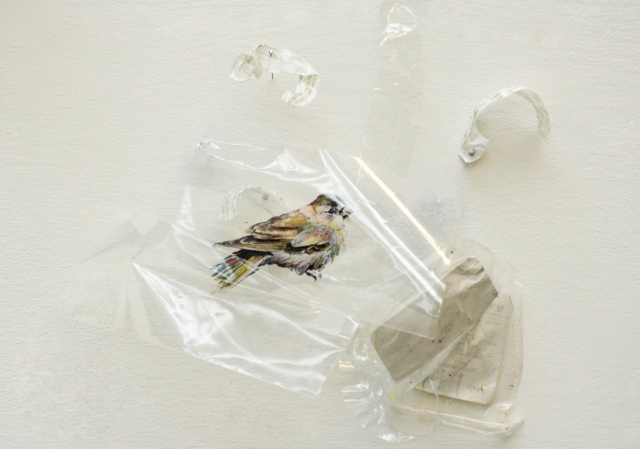 Drawing of snow finch captured at construction sight of new Beijing to Lhasa railway. Image taken from National Geographic special issue, China: Inside the Dragon. Published in anticipation of the 2008 Beijing Olympics. Magazine purchased in Fort Bragg, CA. Image drawn on plastic wrapper for daffodils purchased in San Francisco, April 2008. This plastic likely came from China and like other film plastics cannot be recycled in San Francisco at this time. Most plastic that are intended for recycling along the Pacific coast is returned to China, as brokers there are able to offer the best price for the material given the country’s massive manufacturing out put. Also included are three safety seals from Kombucha, a plastic wrapper from Marin Valley cheese, and a plastic safety seal from a glass bottle of Ester C. All purchased at Whole Foods Market, Potrero Hill in San Francisco and kept during a tree month attempt to not purchase any disposable plastic.